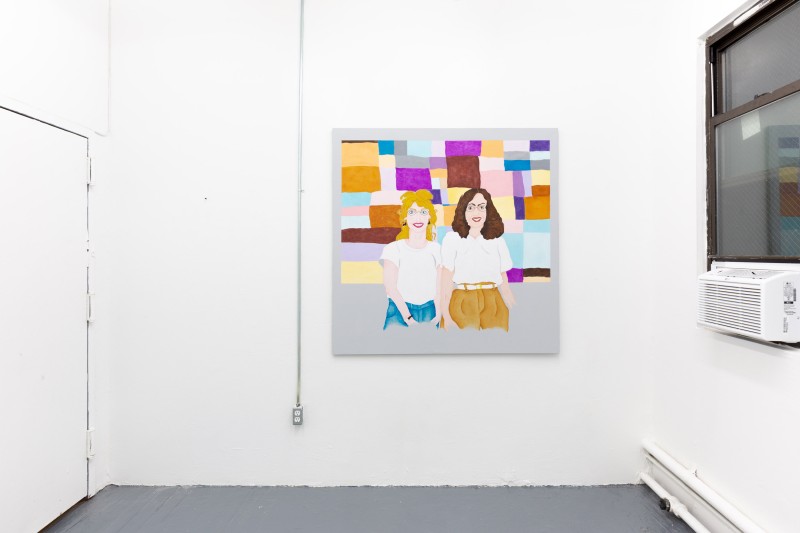 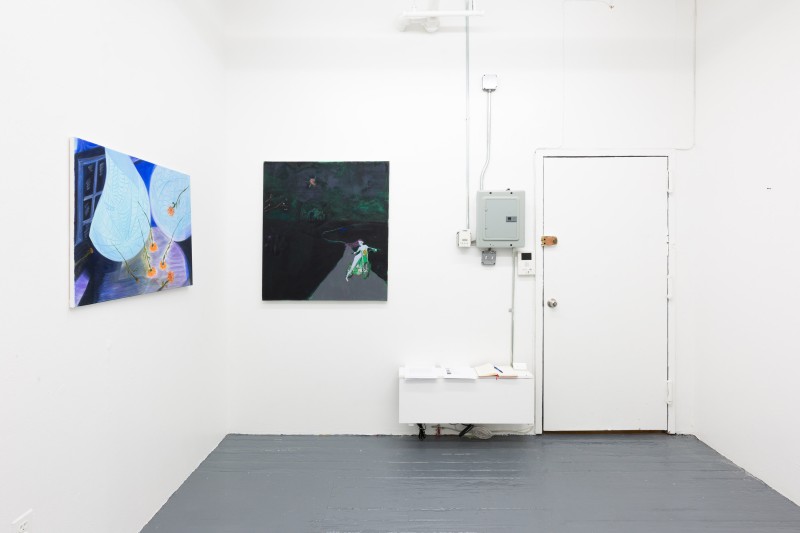 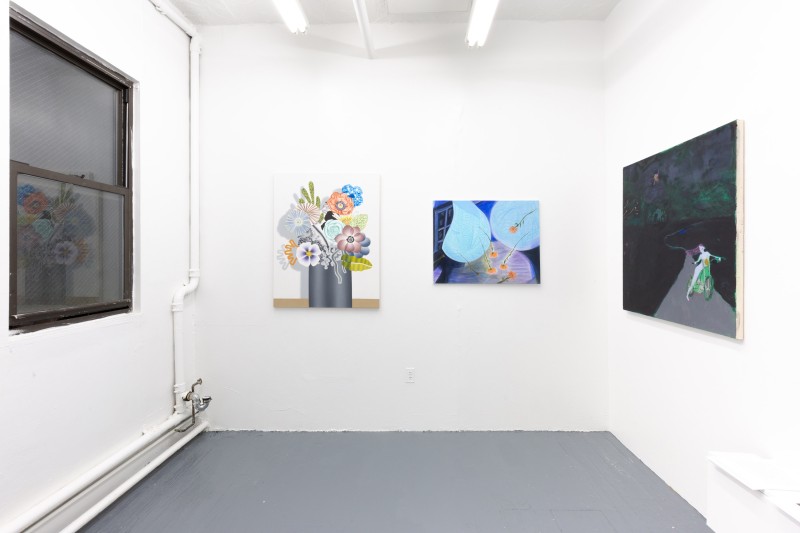 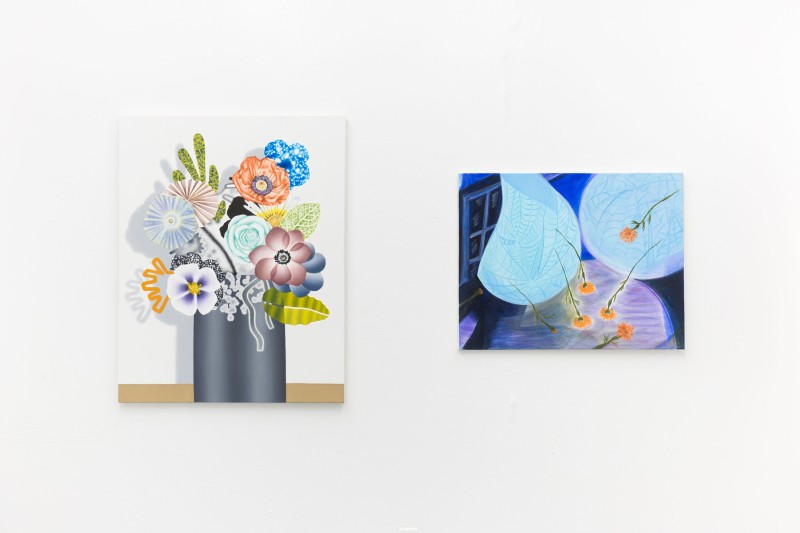 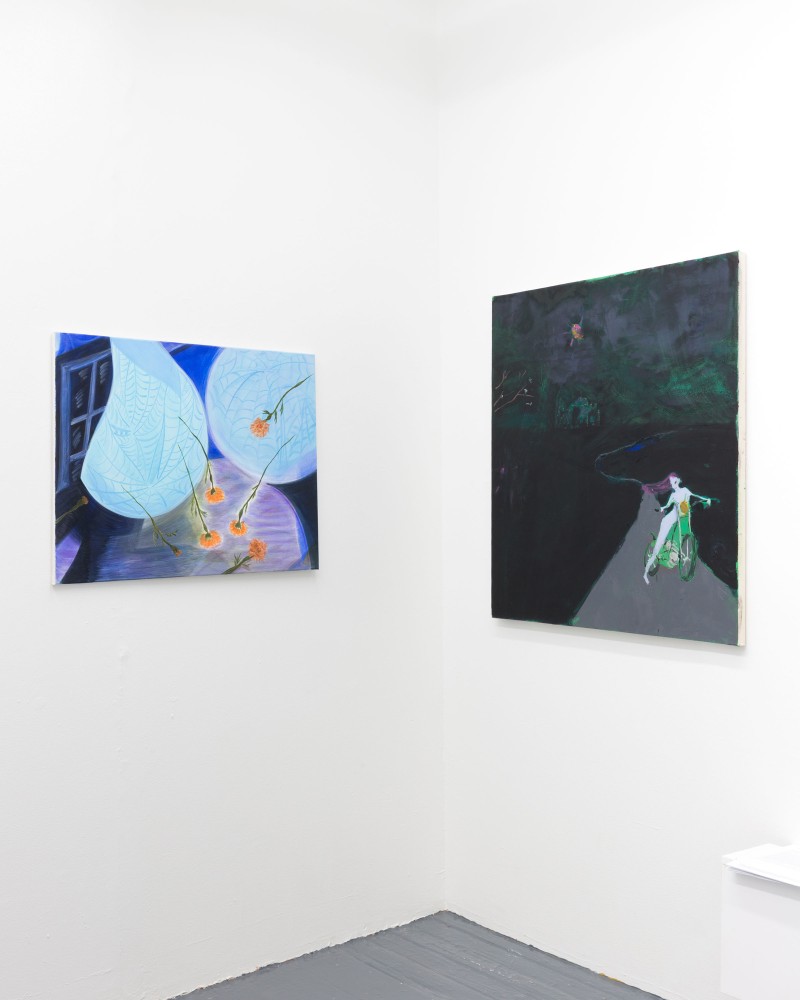 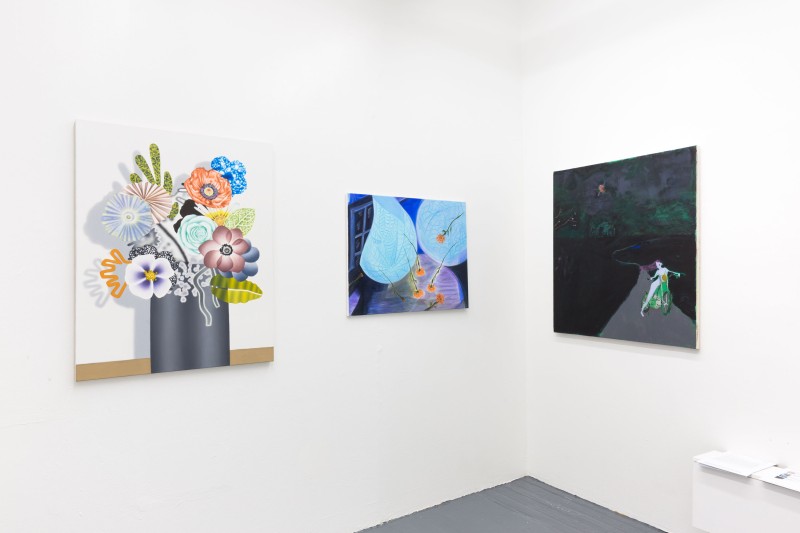 Y2K group is pleased to present a group show by Tisch Abelow, Amanda Baldwin, Alissa McKendrick, Anjuli Rathod called “hypnosis”. The paintings span from 2018-2019 and offer a glimpse into our collective subconscious. The works can be seen as portals into the psyche of ourselves through our relationships, acts of kindness, dark fantasies, memory, mourning, reflection, and recollection. Tisch Abelow’s new painting called Friends creates a focused snapshot of two friends standing side-by-side in front of a mural, quilt, or patterned field. The image evokes empathy with one another and unity perhaps as a dream, fleeting memory, or premonition. Amanda Baldwin’s Persian Poppy Punch is a meditative and serene still-life of Persian poppies with groupings of various flowers. They cast a shadow creating a feeling of dimensionality. The pedals with various textures and shapes slowly become anthropomorphic in nature. Webs by Anjuli Rathod features a magnified view of an interior space within the spectrum of fantasy with an almost cartooned perspective. The warping of the foreground with the floating and expansive spider webs creates a balanced and interactive composition where flowers are placed or falling to the surface. This can also be viewed as a stage set enveloping into a harmonious and mournful image. Alissa McKendrick’s untitled painting features a demon-like figure whisking away on a motorcycle bidding farewell to a harsh and dark place. Simultaneously, the figure could also be embarking on the road to the unknown place off in the distance. The landscape feels haunted– possibly in the spirit or dream world, possibly another dimension.

Tisch Abelow lives and works in NYC. She received her BA from Sarah Lawrence College in 2007 and is a 2019 MA candidate at NYGSP in New York. She has had solo exhibitions at Babayaga (Hudson, NY) and Michael Thibault Gallery, Los Angeles. Past and recent group shows include: A Very Happy New Year to You, with Joshua Abelow and Paula Brunner Abelow (Nina Johnson Gallery, Miami); The Burn Show (Safe Gallery, East Hampton); The Fates (Interstate Projects, Brooklyn).

Anjuli Rathod lives and works in Queens. She received her BFA from School of the Museum of Fine Arts, Boston in 2009. She recently had a solo show at Interstate Projects, (Brooklyn) and a two-person show with Serban Ionescu at Safe Gallery (Brooklyn). Recent and past group shows include: Object of Desire, Tiger Strikes Asteroid, (Brooklyn); Cat Lady, Teen Party (Brooklyn); Easy Lover, Selenas Mountain, (Queens); and Cura(collected), Knockdown Center, (Maspeth, NY) 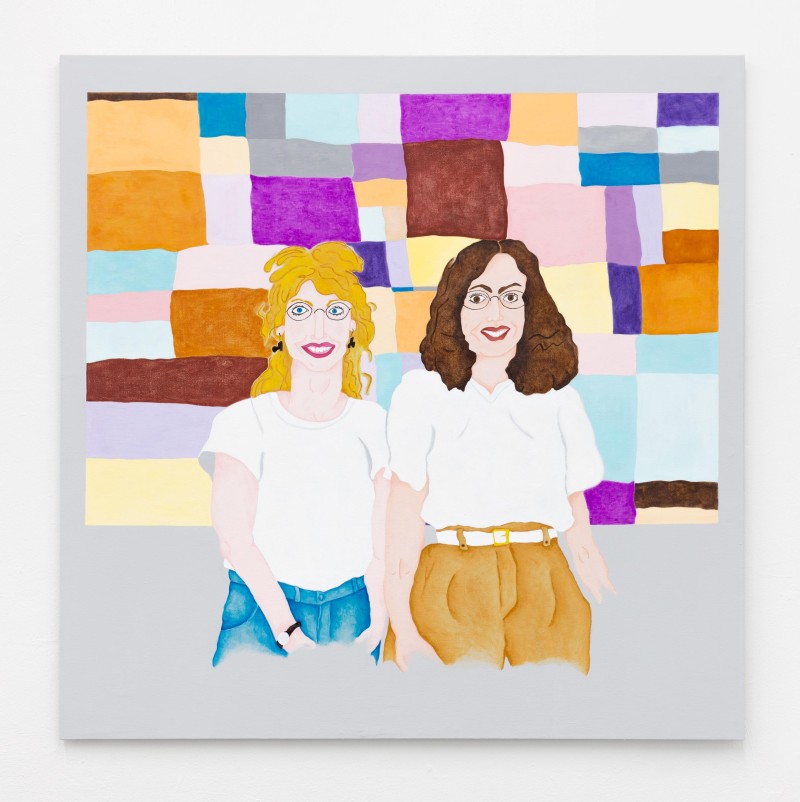 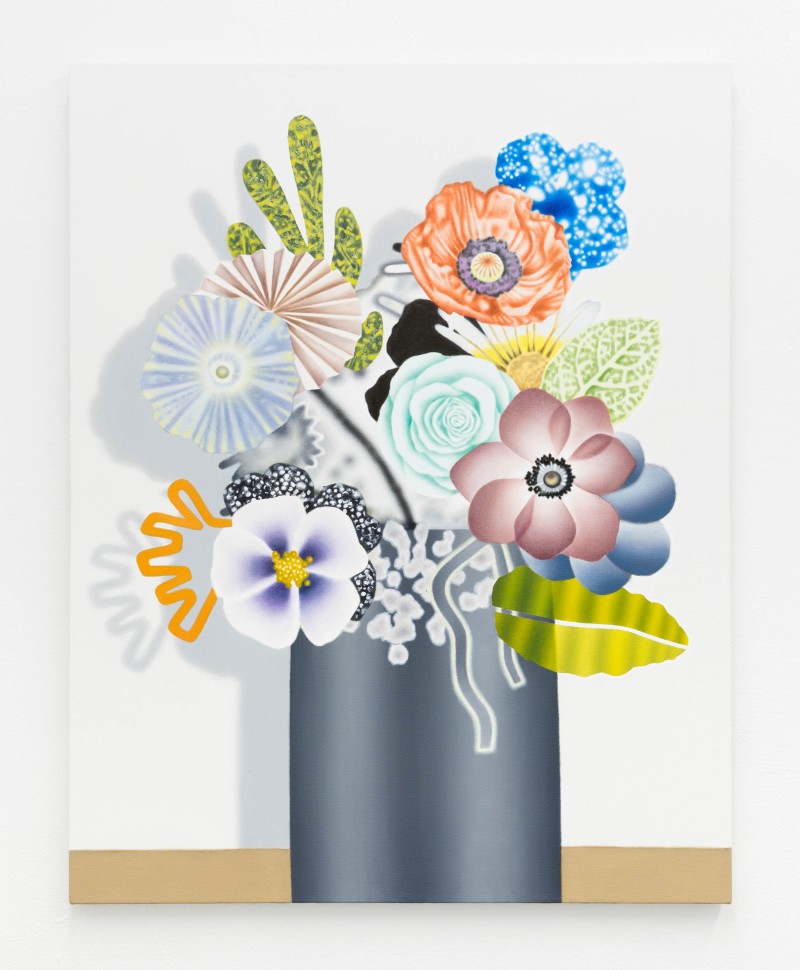 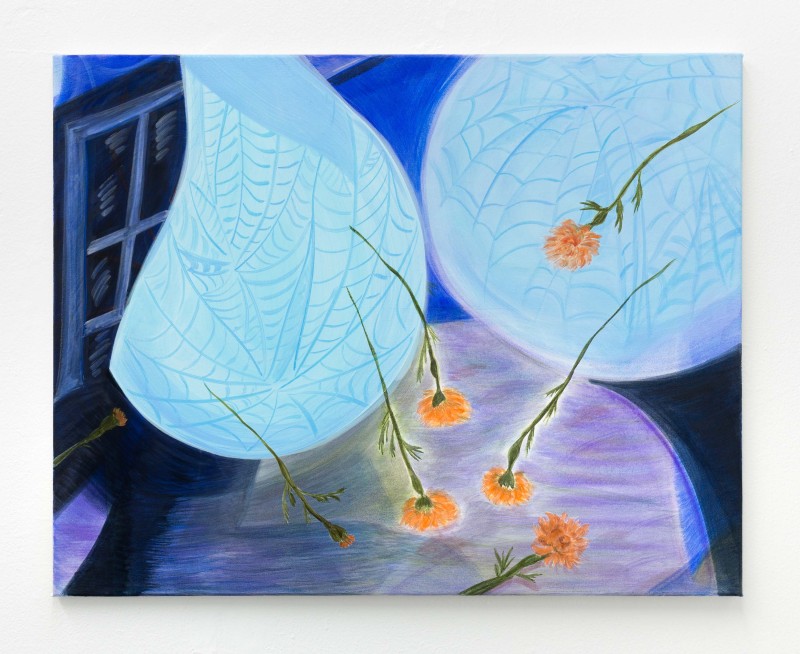 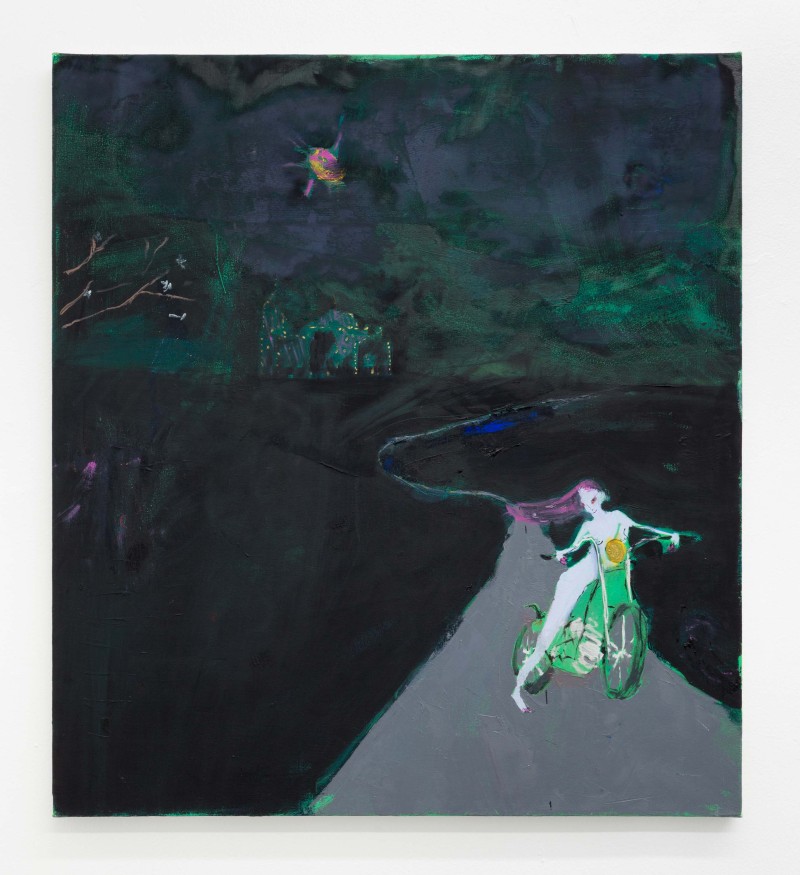